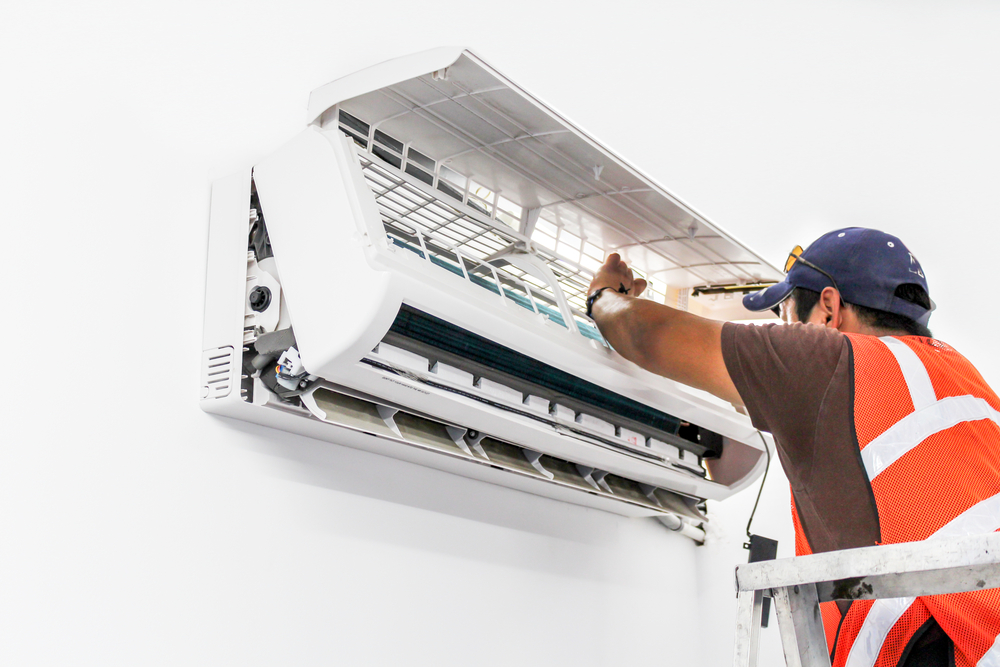 For the most part, people have been using the same central air systems for heating and cooling their homes for about a hundred years now. After all, if it ain’t broke, don’t fix it, right? Central forced air systems are an effective and efficient way to distribute hot or cold air throughout a house or commercial building of any size, from the smallest ranch-style houses to the tallest skyscrapers. However, as cooling technology has continued to advance, a challenger to the throne has appeared: ductless mini-split air conditioners.

Ductless A/C systems aren’t necessarily better or worse than central air, they’re just different. The best air conditioner will always be the one that happens to suit your unique needs and desires, whether that’s a ductless air conditioner, a ducted central air system, or even just a window unit for especially warm summer days. While you can get plenty of information from a conversation with an experienced HVAC contractor, it’s also a good idea to do your own research to know what you’re looking for. That’s why we put together this simple guide to how ductless air conditioners work, what the primary advantages are, and who can benefit the most from a switch to a mini-split system.

What is a Ductless Air Conditioning System and How Does it Work?

Mini-splits and central air split-system units work in pretty similar ways. As the name suggests, these air conditioners are split into two different units, but they still contain all the same parts as a window unit or packaged A/C. All air conditioners cool the air by passing refrigerant back and forth between two coils: the condenser coil that compresses the refrigerant into liquid form, and the evaporator coil that lowers the pressure and turns it back into gaseous form. We won’t get into all the chemistry that makes this work, but the transfer of energy that occurs between the two coils is what cools the air around the evaporator.

In a split-system air conditioner, these components are housed in two separate units. The unit for the condenser coil is often placed outside so it can vent excess heat, and the unit holding the evaporator coil and blower fan is placed inside. A couple of thin pipes connect the two units through the wall so the refrigerant can pass back and forth. Splitting the components into two different units allows the exhaust air to be kept separate from the cool air for your house and keeps the whole system running more efficiently.

So how do ductless air conditioners work? In a central air split-system air conditioner, the blower fan pushes all the cold air into the ducts so it can travel through the house. Mini-splits, however, bypass the ductwork entirely. Instead of a single source connected to ducts, a ductless system uses multiple small evaporator units, sometimes referred to as air handlers, connected to a single condenser unit usually kept outside. Each of these evaporators blows cold air directly into a room, skipping the ducts, vents, and everything else a ducted system requires.

Mini-split evaporator units are a lot smaller than central air units and are mounted directly on the wall of any room you want to cool. Each unit has its own thermostat and heat sensor built-in, so you can set the temperature individually for every room. Even though they all connect back to the same condenser, making them all part of a single system, it’s effectively like having a different air conditioner for each room since they operate individually from one another.

Mini-split air conditioners were invented in 1959 by Mitsubishi after traditional American split-system A/C proved ineffective for Japan’s famously small and tightly-clustered houses. The technology spread quickly through Asia and Europe but failed to take hold in the United States for quite some time. It wasn’t until fairly recently that American consumers finally came around to mini-split air conditioning, but today it’s one of the more popular options in the US and continues to be more popular with each passing year.

How Do I Install a Ductless Air Conditioner?

Generally, we recommend leaving the installation of any new HVAC system to the professionals. Installing a ductless air conditioner involves running coolant lines through the walls as well as wiring each air handler into the electrical system. However, if you’re especially handy or a hardcore do-it-yourselfer, the process of how to install a ductless AC system isn’t as difficult as it might appear to be.

First, choose a wall for the air handler. If the room has an outdoor facing wall, installing the unit there will make your job significantly easier as you can run the lines along the exterior wall instead of inside it. Make sure to place the unit at least six feet above the ground and not too close to the ceiling. Try to keep the air handler out of direct sunlight as this will affect the accuracy of the internal thermometer.

You’ll want to use studs to make sure the unit doesn’t fall, so locate them before drilling any holes. The units generally come with brackets you can use for mounting as well as directions specific to the model you purchased. Make sure that the unit is level, as any tilt will prevent the air conditioner from draining properly. You’ll also need to drill a hole in the wall large enough to pass the refrigerant pipes, drain lines, and control lines through. Your best bet is to drill the hole straight through to the outside so you don’t have to run the lines through the wall itself, but this might not be possible with some housing layouts.

Note that mini-split air conditioners can come with either charged or uncharged refrigerant lines. If the lines are charged, that means they’ve been pre-filled with refrigerant and you should be very careful with them. The chemicals inside the lines can be environmentally hazardous if you accidentally cut the line. If the refrigerant lines are uncharged, you’ll have to bring an HVAC technician in to add refrigerant for you.

The outdoor condenser unit can be mounted on an exterior wall, on the roof, or just placed on the ground, depending on what’s most convenient for you. If you do put it on the ground, you should buy an isolation pad to keep it level and protect it from water damage. Particularly handy homeowners can make their own pad out of concrete to make sure it never shifts.

Once you have the unit set up, it’s just a question of hooking up all the different lines. Be extra careful with charged refrigerant lines, as any spills can harm the environment and potentially burn your skin. We recommend securing the refrigerant, drain, and control lines to the wall to make sure they don’t get tangled, and use line covers to protect them from the weather.

We recommend hiring a professional to handle the power connections unless you’re experienced and very comfortable with electrical lines. Mini-split systems generally require a 220-volt connection running from the unit to a disconnect switch, and then another connection from the switch to the main circuit breaker. Working with electricity can be dangerous, so only do this part yourself if you’re very confident in your own skillset.

What are the Benefits of Using a Ductless Air Conditioning System?

There are several benefits of using a ductless AC system. The first is efficiency. It might seem counterintuitive that a system with several units would use less power than a system with only two, but mini-splits are significantly more energy-efficient than forced air systems of any kind. The main difference in this arena is the ductwork, which represents a major loss of efficiency. Even the most well-designed ducts will leak some air here and there, or feature corners that trap cold air. As a general rule, switching from a ducted central air system to a ductless air conditioner will cut your power bill by 30% to 40% right off the bat. That means serious savings for you, as well as less strain on the environment.

Mini-splits also feature built-in zoning, which is a great quality of life improvement. In the HVAC industry, zoning is the ability to control the temperature in different parts of the house independently. A forced-air system can have zoning as well, but that requires multiple thermostats and registers over the vents that can open and close to control the flow of air. Each mini-split air handler controls the temperature in a single area of your house, and they have built-in thermostats and thermometers so you won’t need to buy any extra devices. This allows each member of your family to control the temperature in their own bedroom, for example, and can usually connect to smartphones so you can set up schedules and other smart tech features. You can also use zoning to further improve the energy efficiency of your HVAC system by turning off the A/C in areas of the house that aren’t currently being occupied.

Another benefit of using an AC unit with this kind of technology is that they can easily convert to heat pumps in the winter. This means you won’t have to spend money on both an air conditioner and a furnace or other heating element, which can offset the high initial price of a mini-split system. Reversing the flow of refrigerant and swapping the operation of the coils will convert a mini-split air conditioner into a heat pump that blows warm air into the room instead of cold air. While this capability isn’t universal, many mini-splits on the market have this ability.

Finally, the compactness of a mini-split system is an advantage in and of itself. Ductwork can take up a lot of space in any house, and avoiding that will leave you a little more breathing room. That’s part of why mini-splits are especially popular for homeowners who live in smaller houses where there’s less room for expansive duct installation. The air handlers are also fairly small and non-intrusive so they won’t have any negative effect on the decoration of your room.

The only major downside of a ductless mini-split system is the initial cost. These units are significantly more expensive than ducted air conditioners, and it can take a while for them to pay for themselves in energy savings. However, when you add in the cost of installing ductwork in your home, the price starts to look pretty comparable. If you’re building a new house or you don’t already have ducts installed in your home, you’re probably better off just going with a ductless system.

Should You Install or Replace Your Central AC With A Ductless AC?

Ultimately, this decision will be based on your own preferences as well as the specifics of your situation. Ductless systems are expensive, and the energy savings don’t necessarily pay for the increased initial cost of purchase and installation if you already have a ducted system. However, the additional quality of life improvements of a ductless system makes switching worth it for many homeowners who can afford to make the change.

If you’re interested in ductless mini-split air conditioners, or you just have some more HVAC-related questions, you can get in touch with Valley Comfort Heating & Air through our website here, over the phone at (707) 755-6951, or in person at our locations serving Sonoma, Napa, and Marin Counties. We’re happy to help you in any way we can, including with the decision to switch to a mini-split air conditioning system.