How the Btu Definition Came to Pass

There are few terms more important to the world of air conditioning than Btu. Every person who owns an air conditioner has probably heard the term once or twice when speaking with (or overhearing) their service technician. However, a startling number of people don’t know what Btu means, or why the term is important. Not to worry, though: we’re here to help. Read on to discover more than you thought you’d ever need to know about the definition of Btu , why it matters so much, and how it came to be such a crucial part of modern American air conditioning work.

Origins of Btu: Thermal Energy and the Need for Accurate Measurement 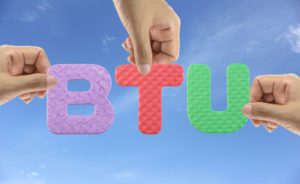 The Btu acronym stands for ‘British thermal unit’: the amount of heat necessary to raise a single pound of water by one degree Fahrenheit. To understand the Btu definition, we first have to understand the history of thermal energy science. Thermal energy is a term used to describe the energy contained in a system as a result of its temperature. The term first came to popular attention in the year 1847, when James Prescott Joule fleshed out a number of closely related concepts in a lecture called On Matter, Living Force, and Heat. Joule was a prominent mathematician and physicist from England. He was an instrumental part of developing the Kelvin scale, and the joule (the measure of heat or energy used in the Btu calculation) which is named after him. Joule was a man of many accomplishments—he was even a respected brewer. However, despite being one of the pioneering minds behind the science of thermal energy in Victorian England, he cannot take credit for defining Btu or promoting it in the mainstream industry.

The reason Joule needs to be mentioned in any comprehensive history of Btu is that he was both the leader of a scientific movement that needed more accurate measuring tools and the individual who developed the measurement of heat or energy (Joule) used in the Btu calculation itself. One Btu is about 1055 Joules.

Thermal energy was soon to take on an incredibly vital role in the British economy. It would eventually be essential for powering the steam engine, a then-revolutionary piece of technology that would allow the British empire to effectively control most of the known world during a significant portion of the next century.

However, the production of steam power required careful calculation to ensure a safe amount of pressure was not exceeded in the system. If more pressure was produced in a system than it could handle, it could potentially explode and cause great harm to the people or infrastructure around it. As a result, it was crucial for British science and industry to use accurate metrics for measuring heat energy. Over the remainder of the century, the Btu definition would become the standard for such work.

However, the fact remains that James Prescott Joule was not the originator of Btu, nor did he usher it into scientific lexicon. So, who do we have to thank for Btu, and when was this unit of measurement developed?

Who is Credited for the Btu Definition?

The exact origins of the definition for  Btu are impossible to verify with complete accuracy, but we can look to early examples of their use in surviving scholarly texts to narrow down the possibilities.

Thermal energy science became an exciting concept to the British in the late 1840s, but the earliest uses of Btu don’t appear until later. In fact, the word “unit” did not itself appear in any records of related science until early in the next decade. It wasn’t until 1851 that Appleton’s Dictionary of Mechanics actually used the term in context.

“Unit” is only one third of Btu though, so where did the rest of the term originate? After the use by Appleton’s Dictionary of Mechanics, there followed several fairly quiet decades. Certainly, thermal energy was being discussed during these years, but there appears to be a dearth of scholarly writing on the subject.

It may be that the excitement over this new avenue of science inspired most interested parties to take a more hands-on approach than a theoretical one. However, the term “unit” was applied directly to writings about heat in 1885, when William John Macquorn Rankine referred to “thermal units” and “units of heat” in Steam Engines. Rankine, like Joule, was a mathematician and a physicist. However, he was also keenly interested and involved with civil engineering (which, sadly, left him no time to become a brewer). He is generally credited for being the first to establish a complete theory of heat engines.

While Rankine may not have coined Btu exactly, he is certainly the closest we can come to pinpointing the originator of the term. In fact, engineers throughout the British Empire accepted Btu as a common unit of measurement for their work by the year 1897. Their work would produce a number of inventions that rapidly helped develop several essential industries. In fact, it could be argued that the science of thermodynamics and the steam technology it facilitated would play a larger role than any other school of thought in ushering in the Second Industrial Revolution.

The Second Industrial Revolution, on the other hand, was due almost entirely to railroad networks that relied upon steam engines. The improvements that Btu brought to measuring thermal energy helped make steam technology considerably safer and more powerful. By the end of the 1800s, many locomotives could exceed speeds of 70 miles per hour.

Industries that Initially Benefitted from Btu:

Steam technology was certainly one of the most notable and vital innovations that relied upon Btu to measure the heat energy it produced, but it was used for far more than railroads. Railroads provided excellent transportation across contiguous areas of land, but they could not allow for the transport of goods across large bodies of water. However, steam technology was also used to power steam ships—which, like steam engines, became considerably more powerful towards the late 1800s when Btu gained recognition among engineers.

Early steam engines were reciprocating engines, which used pistons to convert steam into work. Later on in the century, triple expansion engines replaced many of these systems. Triple expansion engines also used pistons, but were designed to convert a set amount of water into steam and back into water again, eliminating the need to add more water to the system periodically. However, it wasn’t until the very end of the 19th century that more precise steam technology (assisted by Btu) allowed for the most efficient form of engine used in steam ships thus far.

The end of the 19th century saw the rise of the steam turbine. Instead of pistons, steam turbines used jets of high-pressure steam to spin the blades of a turbine, which in turn moved the propeller of the ship in which it was installed. Steam turbines represented a massive leap forward in naval technology. They were not only lighter than triple expansion engines—they were much faster as well. The invention of the steam turbine made it easier for passengers to cross the seas, and proved to be a real boon for tourism. It also gave warships a critical tactical advantage over the slower ships used by other nations. In 1906, the British war vessel HMS Dreadnought became the first warship to use a steam turbine instead of a triple expansion engine, and the results were unprecedented. The relative ease with which Britain could suddenly move troops and copious quantities of civilians played an important role in strengthening the British Empire until the outbreak of the First World War.

This brings us to the role that Btu played in air conditioning. The air conditioner was first invented in 1902, using the same basic principle that was employed in early steam engines: using pressure to convert substances from liquids to gases and back again within a closed system and manipulating temperature in the process. However, it’s important to note that early air conditioners were extraordinarily cumbersome by modern standards. One notable early air conditioner built in 1914 measured more than 20 feet long.

The Impact of Btu on Transportation, Industrial Technology, and Climate Control

It’s impossible to overstate the importance that Btu played in improving technology for numerous aspects of contemporary life. Until the 1890s, calculations for heating were (in retrospect), shockingly imprecise. An example of this was provided by William James Baldwin, who was at the time a highly-respected steam heating engineer. This is his advice for sizing the amount of radiation required in a building:

“The ordinary rule of thumb way of the average pipe fitter, is to multiply the length by the width of a room, and the result by the height, then cut off two figures, from the right-hand side, and call the remainder square feet of heating surface, with an addition of from 15 to 30 per cent for exposed or corner rooms.”

Such guesswork might seem shocking, but at the time it was common for even prominent members of the scientific community to approach thermodynamics in this way. The science was, after all, still in its infancy—a fact which perhaps accounts for the rate of accidents that occurred in early steam engines. Once Btu became a standard way to measure heat energy, such technology became a great deal more precise. Furthermore, it allowed for safer and more convenient consumer technology to become available—including what would become the modern-day air conditioner.

How and Why Btu Calculation is Used in Present Day Technologies

Higher Btu ratings also mean that a given system is capable of adequately changing the temperature for larger spaces. An air conditioner that fits in your window might only have a Btu rating of 10,000, whereas one intended to cool an entire home could be 60,000 or more.

However, it’s important to note that Btu ratings do not increase proportionally along with the space you are trying to affect. In fact, the process of calculating the Btu rating you’ll need to heat or cool your home is quite complicated, and can be affected by many factors. These factors range from insulation to room height and the number of windows in your building. For best results, ask your contractor to size your unit appropriately for your home. All qualified HVAC technicians will be familiar with Btu definition and the sizing process. They should be able to determine the correct Btu rating for a system that will heat or cool your space efficiently.