Cracked Heat Exchangers Can Cause Death

With the polar vortex and other extreme winter weather ravaging much of America, the problem of cracked heat exchangers has become front and center. In a furnace, the heat exchanger filters out and vents the gases from the flame of the furnace. It is the device that separates the gases from your breathing air. It is a metal tube or chamber that serves as a passageway that goes from the burner assembly to the chimney vent. 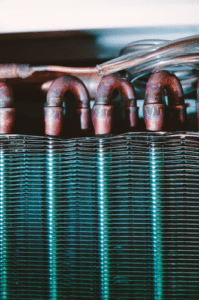 In another case, a barbecue on a terrace in front of a living room caused deadly fumes to leak into the house; after complaining of dizziness and nausea, nine people were taken to the hospital for treatment. One of the big dangers of carbon monoxide poisoning is that the gas is odorless; it can’t be detected by its smell. It’s also colorless, so it can’t be seen as it leaks out of a broken furnace and fills a room or building. Carbon monoxide poisoning happens when the gas builds up in the bloodstream and cuts down on the body’s ability to transport oxygen in the blood. As the oxygen supply gets reduced in the brain, oxygen deprivation can occur very quickly. It can and often does kill people in their sleep, and for all these reasons carbon monoxide poisoning is often referred to as the “silent killer.”

How to Protect Yourself from Carbon Monoxide Poisoning

Authorities urge people to be wary of carbon monoxide poisoning by following these important guidelines:

Most importantly, have your furnace regularly checked, repaired and even replaced if necessary by a reputable company that specializes in heating, ventilation and air conditioning. You should visually inspect your furnace for soot, rust and cracks, but doing this doesn’t take the place of regular inspections by professionals. Do it now.