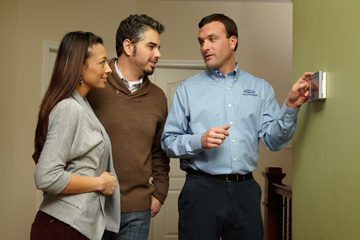 The ozone layer protects the Earth from harmful ultraviolet, or UV, radiation from the sun. Greenhouse gases are gases, such as chlorofluorocarbons, or CFCs, that damage the ozone leaving the Earth’s surface vulnerable to UV radiation and resulting in an increase in temperature. Many people wonder, “Do HVAC systems emit greenhouse gases?”

They most certainly do. It does not matter whether it is a wall unit, a central air conditioner or a portable unit. All air cooling systems release harmful greenhouse gases into the atmosphere.

The refrigerant used to facilitate the transfer of warm and cool air through an HVAC system is a source of greenhouse gases. The refrigerant cycles through an air conditioning system between the evaporator and the condenser converting from liquid to gas and back again.

All air conditioners manufactured during the latter part of the 1900s utilized a liquid refrigerant made of CFCs. When studies showed that CFCs were harmful to the ozone layer, units made in the US switched to liquid refrigerant made of halogenated chlorofluorocarbons, or HCFCs. HCFCs are less harmful to the ozone layer but they still contribute to its depletion. Now the US government is mandating that air conditioning manufactures phase out the use of HCFCs by 2030.

Consumers living in the United States can do their part to protect the ozone layer by purchasing appliances approved by the Environmental Protection Agency (EPA) and the US Department of Energy. These appliances are easy to identify because they are clearly marked with a seal of approval that says Energy Star on it. Consumers are doing themselves a favor at the same time since Energy Star approved appliances consume about 10 percent less energy. This saves money on home cooling costs. Homeowners can improve the energy efficiency of their air conditioning systems even more by making sure there are no leaks in the ductwork and by installing additional insulation in their homes.

Do the Earth and yourself a favor by making sure your home’s heating and cooling system is running as efficiently as possible.

Follow us for more articles that will keep your heating and cooling systems running efficiently.