EER vs. SEER – What is the Difference

Have you ever felt as though you just don’t know enough about your HVAC? If that’s the case, you’re hardly alone. Many people throughout California and beyond wish they had a more thorough understanding of how these essential but complicated systems function. After all, practically everyone who lives in a warm climate needs a way to stay cool at home, and an HVAC is one of the best solutions. However, all the moving parts and acronyms can be challenging to make sense of—which is why we’re about to give you a primer on some of the most important terms you’ll encounter as an HVAC owner: EER vs. SEER.

You’ve probably seen these acronyms before, even if you don’t remember it. After all, EER and SEER are listed on every HVAC system in the United States (at least, they should be). Some of you might already know that EER stands for Energy Efficiency Ratio, and that SEER stands for Seasonal Energy Efficiency Ratio. However, that doesn’t necessarily mean you know what either of those terms mean, or why it will be important for you to consider them.

Let’s begin by looking at EER vs. SEER so that you can understand what each term means and how they’re different. Then we’ll consider particular situations where you should pay attention to each one. 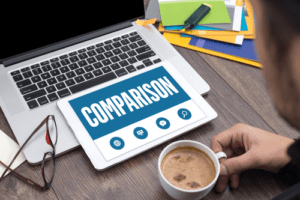 Here’s a basic breakdown of what EER and SEER mean for HVAC owners:

Does that Mean SEER is More Important than EER?

After having read the above, it might be reasonable to assume that SEER is a more meaningful indicator of how well your air conditioner will perform than EER is. However, you should wait a little longer before leaping to that conclusion. The truth is that EER can be just as relevant to you (if not more so), depending on specific conditions.

While SEER is intended to determine the efficiency of a cooling system during a season of real-world use, it only applies to a small portion of the real world. In fact, SEER only represents the efficiency of an air conditioner in places where the average summer temperature is 83 degrees Fahrenheit. That’s a pretty specific number—and there are plenty of places in the United States (and beyond) where the average summer temperature is either considerably higher or lower. Do you live in Seattle, Alaska, Arizona or Southern California? If so, SEER isn’t going to be much use to you. In fact, it will only tell you how efficient your AC would be if you moved to the middle of the country.

Because SEER ratings can be easily misunderstood, it is often better for people in unusually hot or cold climates to compare units based on their EER. The reason for this is that EER is constant across all areas. Think of it this way: SEER ratings are especially useful in certain areas, but EER can be used to compare cooling systems in all regions if you are only looking at their efficiency relative to each other.

SEER vs. EER: A Matter of Perspective

When thinking about SEER vs. EER, always bear in mind the area where you live. Both ratings can be valuable when you are shopping for an air conditioner, but you should never assume that one will be more helpful than the other until you factor in your location.