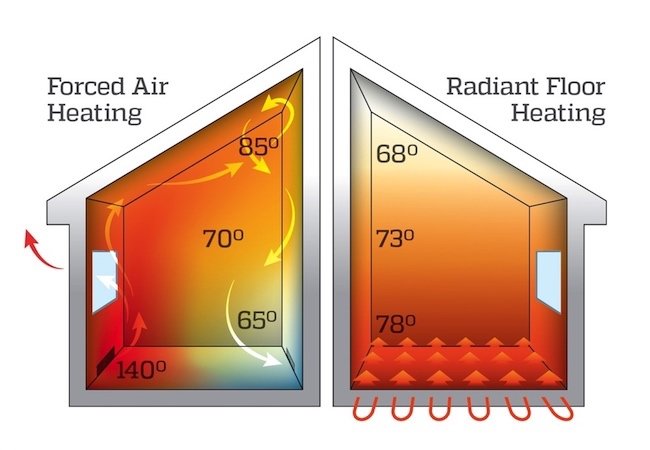 There are several ways to heat your home this winter, but two systems seem to be constantly battling for supremacy. In this article, we will be investigating the great radiator heat vs forced air debate that constantly divides people to the point of madness. We will also look at an alternative system that is gaining such popularity that it might make the whole debate pointless in the near future.

In a radiator heating system, water is heated in a central boiler using either gas or electricity. Depending on the system, this heated water is then distributed through pipes to the radiators throughout the house. The air in the room is then heated through a combination of convection and radiation. In a system that uses hot water, the water is usually returned to the boiler for reheating, but it can also be used for showers and baths.

The first observation most people make when experiencing radiator heat is that the air is comfortably humid, which is due to the use of water as the source to warm the room, whereas a standard forced-air system tends to dry out the air. The water flow to individual radiators can easily be adjusted or completely turned off, making it possible for each room to be at different temperatures.

The downside of radiator heating is that the system responds slowly to temperature adjustments, but this is also great as the cooling of the room is gradual when the radiator is shut off. Some people may also find the actual radiator in the room rather inconvenient and an ugly piece of furniture. Covers are available, but these mostly lower the efficiency of the radiator.

The Versatility of a Forced Air System

A forced-air system works on the principle of air being heated in a central furnace unit and then distributed throughout the home through air ducts. The distribution can happen due to convection – the warm air rising effect – or with fans. Both these methods have their pros and cons, which an HVAC engineer should carefully plan. Fans generate noise, and they also have a cooling effect on the warm air. Yet if only convection is relied upon to distribute the warm air, considerable losses may occur due to parasitic loss to the areas surrounding the ducts.

A large benefit of a forced-air system is that an AC system can also use the ducts to cool the home in the summer months. Or, better still, instead of using a combination of a furnace and an AC unit, a modern HVAC unit can be installed that provides both heating and cooling with the flick of a switch.

A forced-air system responds faster to temperature adjustment commands than a traditional radiator system and will heat a room much more rapidly. On the flip side, there is no gradual cooling from the unit, so the “loss” of heat will be almost immediately perceived by the occupants in the room.

Most people complain that a forced-air system dries out the air, the room and everything in it. External humidifiers are available for the furnace type of system, whereas a good HVAC unit has an integrated humidifier to keep the humidity at a comfortable level.

Answers Regarding Costs, Maintenance, and an Alternative System

A well-maintained radiator heating system and a forced air system have very much the same operating cost per month. The difference that must be calculated is the regular maintenance cost of each system. A radiator system does not require much maintenance, but when it does, the process can be difficult with all the pipes and radiators that need flushing. In comparison, a forced-air system requires regular cleaning to prevent the buildup of dust and the replacement of air filters. Luckily this is an easy job for an experienced HVAC technician.

We mentioned an alternative system to both the old radiator and the forced air systems. It is called radiant heat flooring, and because the name is so close to that of radiator, it must be briefly discussed to differentiate it from the latter. Radiant floor heating is similar to the radiator system in that it uses pipes and hot water, but it can also be designed with electrically heated elements. These elements or pipes are installed under the floor, usually using tiles, as they have good heat conductive and retention properties. The thermal radiation is then transferred from the floor to the whole room. It is a popular system in new houses and when retrofitting existing bathrooms with tile floors.

The answer to the radiator heat vs forced air debate is largely one of preference for a particular system, because although each have their pros and cons, the operating cost is broadly the same for both systems. The big selling point of a forced-air system is that it is often already incorporated in the HVAC system installed that provides cooling during the summer.

Contact us for an informed opinion regarding which system will be the best for your home. Our recommendation will be based on all the factors that should influence your decision, including maintenance cost.