What is a Duct Mounted Smoke Detector? 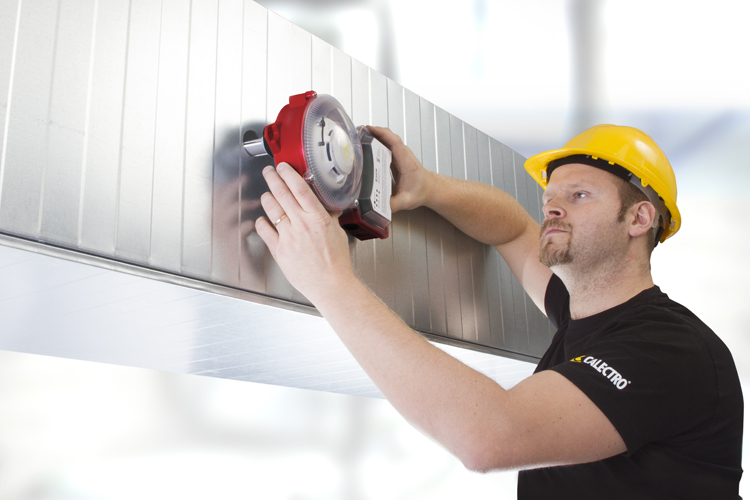 Any HVAC system with an airflow capacity that exceeds 2,000 cubic feet per minute is required by law to be equipped with a duct mounted smoke detector. With any electrical equipment, there is always the danger of a fire occurring. Modern HVAC systems are well-designed, and the likelihood of a fire occurring due to an electrical fault is extremely low, but as with anything, an HVAC system is only as good as the person who installed it. Therefore, a duct mounted smoke detector is an essential additional safety measure in addition to the standard safety measures already in place.

In simple terms, a duct smoke detector’s primary function is detecting smoke or fumes within the HVAC system. These detectors are connected to built-in automatic cut-out systems on the HVAC system itself as well as to a fire alarm.

If fumes or smoke are detected, the detector will send a signal to the HVAC’s safety systems, automatically close duct dampers, and shut down all fans and blowers. This method acts to eliminate the source of oxygen to help contain the fire’s spread. It should prevent the fire from reaching critical systems, thus protecting the entire HVAC system from damage.

The detector will also send a signal to the fire alarm system, which will trigger a visual alarm at the alarm panel and an audible fire alarm to alert people in the building that a fire was detected. Modern HVAC systems are highly advanced and will, in addition to reporting a fire, indicate precisely where the fumes or smoke were detected in the system.

Unfortunately, false alarms may occur. Therefore additional systems have been put in place to ensure the accuracy of such systems. These include supplementary reporting capabilities, such as discovering cover removal from a detector or power loss. The inclusion of additional trouble conditions has largely eliminated false alarms, as modern HVAC systems can differentiate between trouble conditions and fire condition alarms.

Must My Duct Mounted Smoke Detector Be Regularly Serviced?

Legislation requires duct smoke detectors to be visually inspected at least twice per year. As with anything, regular inspection and maintenance services are likely to save you a bundle of money in the long run. For duct smoke detectors, ensuring they remain in good working condition can also save lives.

A registered and qualified HVAC professional must perform bi-annual inspections of your duct smoke detectors to ensure they are sturdily mounted, free from obstruction and that both the unit itself and the circuit board shows no signs of damage.

They should also ensure that all trouble signals are clear and visible, inline filters are clean, sampling systems’ piping and fittings are airtight and functioning correctly, and there are no airflow issues in the duct.

A duct mounted smoke detector fulfils an essential function in your HVAC system, not only for the safety of your HVAC system but for your family, tenants, or staff. Ensuring that you keep your HVAC system compliant with relevant regulations and codes provides optimal functionality and effectively increases its lifespan, saving you money in the long run. You will also enjoy insurance benefits due to regular maintenance and inspection services on your HVAC system should a fire break out.