What the Law Says About Refrigerants and the Ozone Layer

What Legal Regulations from the EPA Are Relevant for Your Commercial Air Conditioner?

The federal government has become heavily involved in regulations geared towards protecting the people of the United States. One of the largest areas where those regulations have an impact on industries is the environment. While it wasn’t realized at first, seemingly-innocuous and helpful devices such as a commercial air conditioner wound up having a significant effect on the atmosphere, to the degree that atmospheric scientists became deeply alarmed at some developments. As with other industries, the discovery of significant environmental impacts preceded regulatory changes that affect many aspects of life both for businesses and consumers.

How Could a Commercial Air Conditioner Affect the Environment? 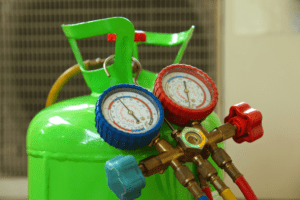 Since the 1970s, the federal government’s involvement in environmental regulations has increased markedly. From its inception on December 2, 1970, the EPA has “been working for a cleaner, healthier environment for the American people.” While different administrations have come and gone, the scientific awareness of how interconnected our environment is, has only increased.

At first, the EPA was involved in working to recover from disasters like Three Mile Island, but in the mid-80s, greater attention was given to chlorofluorocarbons (CFCs) and other ozone-depleting substances due to the initial reporting of the ozone hole over Antarctica in the 1980s. The ozone is the part of the atmosphere responsible for safely reflecting or refracting incoming ultraviolet radiation –essential for keeping life on earth safe from too much direct exposure to the sun.

Once this connection was found, the EPA began investigating sources of CFCs and, with the help of Congress, managed to restrict the use of several kinds of CFCs in industrial usage. They were found in various sources, including aerosol canisters of hair spray, fire suppression systems, and the refrigerant in a commercial air conditioner or refrigerator.

The Current Legal Status of CFCs in America

As of 2019, there has been significant progress in minimizing CFCs in all kinds from industrial production. By 1999, aerosol containers successfully removed CFCs from the formula, eliminating the harmful chemical without inconveniencing the average American. Halon, however, is needed for aeroplane fire suppression because the unique conditions of a pressurized cabin at high altitude demands it. While scientists continue to work on alternatives, there is currently no replacement.

The impact that recent regulations have had will be seen most clearly with HCFC-22 (also referred to as R-22) — which is the most common refrigerant still in use all over the world, and while it is both affordable and efficient, it’s a common CFC nevertheless. As a result, since 2010, governmental regulations have halted the domestic production of HVAC units that use R-22, and the manufacture and import of R-22 itself was dramatically curtailed. By January 1, 2020, there will be a full prohibition on the manufacturing of this refrigerant.

None of this has occurred in a vacuum. While R-22 has been a consistent ingredient in HVAC systems and refrigerators, it is possible to make them without it. The tradeoff is some temporary instability in the market as older devices lean more heavily on a diminishing supply of R-22, after which purchasers will transition to more expensive alternatives. While the atmosphere will take decades to recover, consumers and businesses must make a more aggressive transition.

For businesses, the production cost for equipment will, at this point, remain the same due to the consistent prohibition on new systems that use R-22. There will be a growing market for conversions of old machines or the purchase of new machines as the market of R-22 itself dries up. Those who remain using the substance will see prices spike because the demand will exceed the supply.

Consumers, unfortunately, must bear the brunt of this. Businesses cannot absorb the additional cost at the old prices, so they will increase their prices commensurately to remain profitable. Customers will wind up paying the additional rates of the new systems that avoid the use of R-22. Certified, trustworthy HVAC companies may see the benefit of offering affordable financing options for customers impacted by these regulations.

Where to Go from Here: The Post-Implementation Future of 2020

When confronted with a future challenge, one must either change the course of society to prevent it or instead prepare to endure it. As the government of the United States has opted to change course to prevent the ozone hole from becoming a more dangerous problem, we as producers and consumers must adapt how we live our lives according to those new regulations.

Ultimately, as the laws continue to be implemented and the changes occur behind the scenes, most Americans will be mostly unaware of the “why”, and only see immediate effects in rising prices of their commercial air conditioner. While many people have internalized the gradual growth of inflation, it remains to be seen if the price jumps for HVAC will be significant enough to draw popular attention in the hopes of finding a way to both preserve the atmosphere and consumers’ wallets.