How old is your commercial AC unit? Depending on the unit’s age, you may be due for a unit replacement—or at least a change in refrigerant. Regulatory changes are coming in 2020 that could make it more challenging for HVAC technicians to service or repair older AC units. For some businesses, these changes may make it worthwhile to look at newer, better air conditioning units.

The Changes on the Way 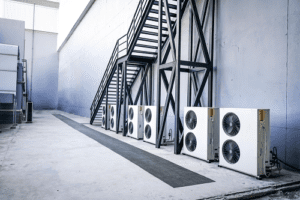 The most significant upcoming change for the air conditioning industry in the new decade is the phase-out of the commonly-used AC refrigerant R22 (also known as Freon). In 2020, R-22 will effectively be illegal in the United States.

A quick primer on R22 and refrigerant for those who aren’t familiar. While most people know that most air conditioning systems use refrigerant, a less commonly known fact is that there are many different types of refrigerant. R22 has been linked with the depletion of the ozone layer and classified as an environmental danger. For more than a decade, there has been a focus on phasing out the use of R22 in favor of R-410A or R-422B, which are supposed to be safer substances capable of doing the same things as R22.

If you have a commercial AC unit that was manufactured in 2010 or later, then you do not need to worry about the new R22 laws. Any AC unit produced in the United States this decade will not use R22 at all. However, if your commercial unit is older—from the mid-2000s, for instance—then you may want to consult with an HVAC technician about planning for a replacement.

Do note that it is not illegal to continue using AC units that require the use of R22. Simply using R22 is not against the law at this point, and there is no legal regulation that requires companies or homeowners with older AC units to stop using them just because they utilize Freon. The goal at this point is for R22 (and other chemicals that are classified as hydrochlorofluorocarbon, or HCFCs) to be phased out of all use and manufacture by 2030.

However, the fact is that maintaining an AC unit that uses R22 is going to become increasingly challenging in the years to come. If you have had to have your R22-using unit repaired in the past few years, you likely noticed that the cost of those repairs was on the upswing. The United States is not the only country phasing out HCFCs. The agreement to do so is called the Montreal Protocol and has been ratified by numerous other nations, including all countries in the United Nations. These factors are combining to make R22 refrigerant more difficult to find (and more expensive to purchase). In 2020, R22 will only be available as an after-market purchase. As the substance continues to become scarcer—and as more and more users of pre-2010 AC units require refrigerant-related repairs—prices are only going to go up.

If you have an aging commercial air conditioning unit that uses R22, 2020 and its regulatory changes present a good opportunity to assess things and determine if the time is right for a full system replacement. While it could feasibly be possible to subsist through this decade by purchasing after-market Freon whenever your unit requires refrigerant-related repairs, doing so would likely not be a cost-effective option given the climbing prices of R22. Investing in a new unit in 2020—one that utilizes an alternate, compliant refrigerant—will make the maintenance and repair process for that unit much easier and more affordable in the years to come. Furthermore, since R22 has not been used in any new air conditioning models since 2009, there have been significant technological gains that your business can take advantage of by purchasing a newer, more efficient air-con system.

A good first step is to contact your HVAC technician and have them conduct a thorough inspection of your current commercial AC unit. Your technician will be able to tell you about any necessary or impending repairs and advise you on the likely costs. Based on this information, you can start making a plan for when and how to upgrade your commercial unit in the near future.