How do Commercial Cooling Systems Work?

For more than a century, air conditioning has helped make indoor environments more bearable even in the dead heat of summer. At home, it’s a matter of comfort and convenience. In commercial applications, efficient cooling matters on an even larger scale. Crucial not just for keeping patrons and employees in good spirits but also for managing the building’s energy consumption, commercial cooling systems have grown highly specialized over the years. At their core, though, most still operate on the same principles found working in the average home. So, how do these systems work, and how do they differ from other forms of cooling?

The Basics of Commercial Cooling

The good news is that in most applications, commercial cooling systems function in virtually the same way that a regular air conditioner would — just on a much larger scale, of course. There are other types of commercial HVAC systems, too, but these are most common. Remember that the process involved takes advantage of an interesting quirk of physics: it is easy to pull heat out of the air and into an expanding gas, which readily absorbs energy from its environment.

Thus, commercial systems use the same cycle of expanding and condensing a distinct refrigerant gas that a home split system would employ. The key difference is that commercial units must be able to handle a much larger volume of air while also cooling much larger spaces. This has led to some innovations, such as chillers, used for efficiently cooling big, open interior spaces. By and large, however, the traditional cooling process engineered many decades ago still powers commercial systems today. The critical difference often comes in the form these units take. 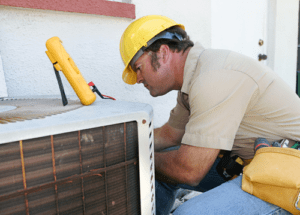 Ask the average person to imagine a commercial air conditioner, and they’ll often think of a big, bulky-looking box sitting on top of a building. Rooftop units are just one type of commercial system, but they are also among the most common — and for good reason. They are tidy, efficient, and powerful packages that offer robust cooling power. Called “package units” because the components are “all in one package,” they stand in contrast to split systems, which separate the cooling evaporator from the radiating condenser and its compressor.

Let’s break down the typical cooling cycle you would experience in a package unit for a large commercial space. It goes like this:

The second phase of the cycle begins at the opposite end of the unit.

Commercial package systems often include the ability to introduce fresh air from outdoors for ventilation purposes as well. In some systems for very large buildings, exterior air may even be used to cool the interior when the ambient temperature is low enough. Other common differences include variations in size and power. Innovations such as these help commercial systems achieve better efficiency.

Remember that cooling systems for commercial use must contend with some challenging conditions. Among the variables to account for are room size and building layout. In some cases, a single unit may not be enough for an entire building — or relying on just one package could strain the system beyond its limits. This scenario is where HVAC zoning becomes essential.

Zoning is the process of putting different areas of the same building on disparate cooling circuits. Instead of attempting to cool the entire building at once, this allows some rooms to be warmer and others to be cooler. For large offices, hotels, and other structures, zoning is indispensable for achieving lower energy costs. When considering any modifications, it is worth discussing the potential benefits of zones with an HVAC professional.

In the end, the right type of cooling system is heavily dependent on the type of business, the size of the building, and the number of spaces that require cooling. To summarize, those interested in exploring options for a commercial structure’s cooling needs must consider:

To learn more about how commercial cooling systems work and what options are suitable for your business, make contact with reputable local professionals. Reconfiguring your building’s cooling systems could open the door to savings and better performance.