Have you heard of thermally-driven air conditioning? If not, you could be hearing a lot about it soon.

There is a push right now on the global scale to make HVAC—air conditioning in particular—more environmentally friendly. HVAC uses a considerable amount of energy, be it electricity or natural gas. Air conditioning also often relies on refrigerant, an organic compound with some varieties that are known to be ozone-depleting substances. Meanwhile, climate change is rendering air conditioning more critical to our comfort, our productivity, and our overall health and wellbeing than ever before. This equation is driving innovation, and some of those innovations could change the world of HVAC as we know it.

What Is Thermally-Driven Air Conditioning? 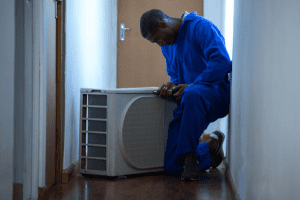 To delve into the concept of thermally-driven air conditioning, we need to take a look at the company that is leading the charge in this innovative new technology: an Australian-based manufacturer called Chromasun.

The term “thermally-driven” and the brand name “Chromasun” don’t immediately bring to mind thoughts of air conditioning. The definition of “thermal” is “relating to heat,” while Chromasun, as a company name, indicates more of a solar venture than anything to do with HVAC.

However, therein lies what makes Chromasun’s thermally-driven AC such an interesting concept: it is essentially heat-driven air conditioning, with the heat coming from solar sources. Chromasun uses what it calls a Micro-Concentrator (or MCT) to harvest solar energy. The MCT is a markedly smaller package than what you might imagine if you’re picturing a photovoltaic solar array—hence the “micro” prefix. Chromasun even calls it “the most space-efficient solar technology available.” The small size makes MCT solar collectors easier to transport, find space for, and install—usually on a rooftop. Where solar panels are a difficult sell for many homeowners and businesses, only due to space limitations, Chromasun’s MCT enables the harvesting of solar energy in a more convenient package.

Chromasun uses its solar collectors to create heat. This process occurs by focusing and concentrating the light of the sun onto a pipe filled with oil or water. Chromasun’s design utilizes a Fresnel lens—the type of lens used in lighthouses and searchlights to formulate light into narrow, highly concentrated beams—to concentrate and magnify the light. This magnification, in turn, helps generate more heat.

In Chromasun’s thermally-driven air conditioning design, this solar heat energy is what drives the cooling process. The system uses chillers, which generally rely on either an electrically-powered compressor to create cool air or a boiler that is generating steam. The latter option technically is thermally-driven AC but is still ultimately using electricity as boiler systems rely on electrical power to heat water in the first place. The Chromasun system is an environmentally friendly HVAC option because it can produce high enough temperatures to replace the steam function of the boiler and still accomplish the same goal. Thus, the system allows for complete cooling using nothing but solar energy and a well-positioned MCT installation.

If the sun isn’t out, Chromasun’s system utilizes a natural gas backup that acts as an alternative power source for the chillers. This backup source keeps the cool air coming until the skies clear once more, and the system can resume solar collection and concentration. As with other types of solar energy, Chromasun’s system probably still isn’t the right option for areas that tend to have lots of cloud cover. In sunnier parts of the world, though—including here in California—this type of solar-powered, thermally-driven cooling is a smart, economical, and sustainable option.

The founders of Chromasun have argued that using their MCT systems for space cooling is markedly more efficient and ROI-driven than purchasing photovoltaic solar panels. Instead of collecting solar energy and then converting it into usable electricity, these systems use the heat of the sun to drive a process that is often driven by heat nonetheless. Thus, instead of using a photovoltaic panel array to collect energy, using an inverter to convert it into usable electricity, and then using that electricity to power an air conditioning system, the Chromasun design is effectively cutting out the middle steps and channeling the solar energy directly into cooling.

This factor marks the first significant benefit of a thermally-driven air conditioning system. The other is that it can replace some of the less efficient, refrigerant-based air conditioning systems on the market. Collectively, this double-benefit design means both a reduction in energy usage and a reduction in potentially damaging emissions. The Chromasun technology is still relatively new and hasn’t become commonplace on the market yet, but it’s a smart and innovative concept that could deliver many benefits for the future of cooling at home or work. If you want to know if thermal-based air conditioning is a possibility for you—or if you are simply looking for ways to be more sustainable with your HVAC usage—talk with your HVAC contractor today.