Is Your Air Conditioner Contributing to Climate Change?

The Air Conditioning Climate Change Conundrum: The Science of the Situation 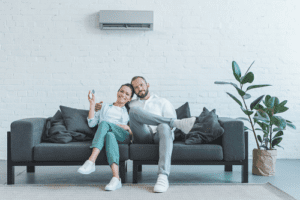 There are a few reasons that air conditioning systems might be considered a contributor to climate change. Perhaps the most obvious of these factors is energy usage. A home without air conditioning in the summer—one that can subsist on open windows and the cooling of natural breezes and airflow—is going to use less energy than a home with an air conditioning system that runs once or twice per hour. It’s not just homes, either. Broadly, HVAC accounts for nearly 40 percent of the energy consumption in United States office buildings, with fans and cooling being the biggest drivers of that usage. In total, the International Energy Agency (IEA) estimates that cooling accounts for roughly 20 percent of building electricity usage in buildings around the world. The IEA also predicts that the energy demand for space cooling applications will triple by 2050. This massive amount of energy usage means more global emissions from coal, oil, and natural gas, which collectively contribute to climate change.

The problem isn’t just energy usage and corresponding emissions, though. Another issue is the refrigerant that many air conditioning systems use to cool the air. Most refrigerants are hydrofluorocarbons (HFCs), organic compounds that, in many cases, have also been identified as ozone-depleting substances (ODS). Many types of refrigerant have now been banned or are being phased out because they are dangerous to the environment. HCFs, when leaked into the atmosphere, cause much higher levels of greenhouse gas buildup than, say, carbon dioxide.

Looking Toward the Future

Obviously, there is a dilemma here. On the one hand, climbing temperatures mean that air conditioning plays a more important role in comfort, wellbeing, productivity, and overall quality of life than ever before. On the other hand, air conditioning may only be contributing to the problem, thus stoking a vicious cycle of global warming and personal cooling. How can consumers stay environmentally conscious without leaving behind the creature comforts and other benefits of air conditioning?

The good news is that no one homeowner or business is in this fight alone. The widespread phase-out of the most problematic HCFs will make a big difference, and technological innovations and improvements will mean that tomorrow’s air conditioners will be markedly more efficient than today’s (which are already a big step up from yesterday’s). There are even murmurs of modifying today’s air conditioning systems so that they are capturing carbon dioxide from the air and turning it into fuel—thus enabling air conditioners to fight climate change rather than contributing to it.

With all these points made, waiting for the technology to improve is far from the only option available. There are many things you can do to improve the efficiency of your home or business cooling system starting right now. Regular system maintenance will enable your air conditioning unit to run more effectively. Frequent air duct cleaning promotes better airflow, which can help with system performance and efficiency. Upgrading to energy-efficient windows boosts thermal performance in your building, enabling greater temperature consistency and less reliance on the air conditioner. Using blinds and curtains—and even using smart technologies to automate their opening and closure—can minimize how much the sun affects the interior temperature of your building.

In the workplace, even simple policy changes can make a difference. For instance, in many office buildings, dress codes require men to wear long-sleeve dress shirts, ties, and long pants—if not suits or jackets—even during the hottest parts of the summer. A simple change in policy that allows men to skip the ties and jackets and wear short-sleeved shirts (or even shorts) could make a difference. In this scenario, a business would not need to cool their offices quite so aggressively to keep temperatures comfortable and bearable for workers wearing multiple layers of clothing.

If you want to do your part in cutting the air conditioning climate change link, speak with your HVAC contractor today. They will be able to provide some recommendations for how you might make your system—and your home or business as a whole—more efficiency and more sustainable.