Types of Heating Methods: How Does Solar Heating for Commercial Buildings Work?

Typically, when discussing the top energy users or greenhouse gas producers in the United States, people tend to point fingers at either the manufacturing industry or the transportation industry. In reality, though, residential and commercial buildings in the United States account for roughly 40 percent of the nation’s total annual energy usage—more than either industrial or transportation. As the population grows and building sizes expand, that figure will likely only continue to increase. Businesses and building managers are looking for ways to become more sustainable—partially out of moral responsibility, partially because consumers are calling for greener initiatives. Among other priorities, that push for green energy usage has led many commercial building owners to consider more efficient types of heating methods—specifically solar.

In a scholarly paper about “Solar Heating in Commercial Buildings,” penned for Washington University in St. Louis, Phillip Irace and Harold Brandon stated that HVAC equipment accounts for 40-50 percent of all commercial building energy usage. That figure would mean that a very substantial portion of the United States’ total annual energy consumption goes toward HVAC—whether in the form of electricity or natural gas. Irace and Brandon proposed using the open space on the roofs and walls of commercial buildings to install solar collectors, which could offset the need for other energy sources to power HVAC systems.

Solar HVAC: How Does It Work? 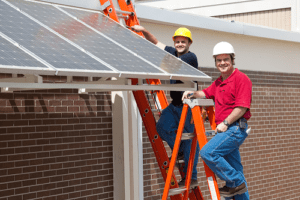 There are actually two types of solar heating that are used in commercial buildings: passive solar heating and active solar heating. The former method can be utilized even in buildings that utilize more traditional gas or electric-powered HVAC systems. The latter method requires a bit more of a hardware change but can be accomplished with the right technology and overall commitment.

Passive solar heating is mostly driven by the architectural design and layout of a building. The most common type of passive solar heating—and the most easily implemented—is window design. Windows that get a healthy amount of sunshine during the day can bring a lot of heat into a building with no need for electricity or gas. Of course, in the summertime, all this sunlight can create too much heat, forcing your air conditioning unit to work harder to cool the building. Using blinds and shades to control sunshine throughout the year can curb this problem, especially if the blinds are tied to an automation system.

Other hallmarks of passive solar heating design include efficient, high-quality insulation and the choice of building materials (such as concrete) that can absorb heat and radiate it for long periods of time. The most effective passive solar designs are achieved with brand-new buildings, as even the orientation of the building—and its relation to the rising and setting of the sun—can impact solar efficiency.

Active solar heating systems, meanwhile, can work in a variety of different ways. The most common types of heating methods for solar HVAC are liquid-based heating and air-based heating. These systems start with flat plate solar collectors, which look similar to the solar panels that harvest sunlight for electricity purposes but are actually a bit different. Flat plate collectors include pipe, through which some type of fluid flows to absorb the solar heat. This fluid (usually water) then flows to a storage tank or is distributed throughout the building via radiant floor systems, radiators, baseboards, or even forced-air systems. In other words, these systems work similarly to boilers or other water-based heat systems; they just use the sun to heat the water, rather than gas or electricity.

It is also possible to have a solar heating system in which the fluid heated by the flat plate solar collector is air rather than water. These systems exist in both closed-loop and open-loop designs. Closed-loop solar air heating systems are similar to typical HVAC heating systems. They pull in cool return air from the building, heat it up, and then redistribute the warmed air. Open-loop systems pull in air from outside and use solar energy to warm it up, before distributing it throughout the building via ducts, vents, and fans.

Assessing the Economics of Solar Types of Heating Methods

Now that you understand the basics of how solar heating works, the next big question is whether a solar HVAC system makes sense for your commercial building.

On the one hand, solar heating systems can deliver big energy savings and utility bill reductions in areas that get lots of sunlight. On the other hand, these systems are very expensive to install—to the point where the upfront cost might not make sense for many buildings. According to Energy.gov, these types of systems are most likely to deliver good ROI in areas that have “cold climates and good solar resources.” In California, where winters are mild and heating tends to represent a much smaller percentage of HVAC spending than cooling, solar types of heating are not the most logical investment. If you want to learn more, though, feel free to consult your HVAC expert.