Ice-Powered Air Conditioning is on the Way

If you’ve done much reading in the past decade about HVAC innovations—particularly if you’re interested in sustainable, eco-friendly technologies—then you’ve probably read a bit about ice-powered air conditioning. Early in the 2010s, ice-based AC systems were one of the most promising developments on the market—particularly for homeowners or business owners that were seeking ways to lower energy costs or be more environmentally conscious. Could ice-powered AC have a place in the future of HVAC, or is it merely a trivial innovation that won’t have much influence on the long-term development of cooling technologies? In this post, we’ll try to find an answer. 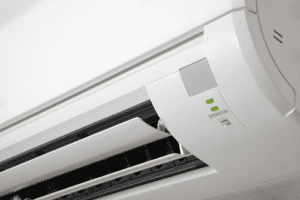 There has only been one player in the ice air conditioning niche so far: a company in California called Ice Energy. Established in 2003, Ice Energy developed air conditioning systems that worked by freezing water in large quantities during the night and then using it in place of a refrigerant/compressor system to cool air during the day. The innovation made sense in large part due to power grid factors. Ice Energy units—known by the product names “Ice Bear” (for commercial buildings) and “Ice Cub” (for single-family homes)—would freeze a tank filled with hundreds of gallons of water overnight, when power demands were lowest.

The ice could then be used during the day to cool a home or business. Doing the actual cooling during the night meant much lower costs for users than if that process had to occur during peak power grid hours. Freezing the water rather than merely cooling it, meanwhile, meant that it could retain its temperature for most of the day. As a result, Ice Bear and Ice Cub systems required little more than the operation of a fan system to cool air and distribute it during daytime hours.

The benefits of Ice Energy’s systems were twofold. First, since the company developed a system that took power grid factors and energy demand fluctuations into account, it could enable users to save money on their utility bills without settling for lesser performance. Second, since the system was using ice to cool air rather than refrigerant, it could (mostly) rid customers of having to use refrigerant substances (many of which are known to be ozone-depleting substances) regularly. Thus, the Ice Bear/Ice Cub range stood to save customers money while also reducing their carbon footprint—even if it didn’t mean that they were using any less energy.

The biggest drawbacks of the technology were also twofold. First, Ice Bear and Ice Cub units could only effectively cool a space for about six hours during the day, which meant the system needed to be used in conjunction with a standard air conditioner rather than as a full replacement. This double-system requirement meant more of an investment for businesses and customers to achieve what was ultimately the same cooling goal. Second, the systems used a lot of water—450 gallons, in the case of the commercial units—which is its own cost and environmental concern.

At least right now, it seems that ice-based air conditioning technology is something we can file away into the “failure to launch” category. Ice Energy, despite plenty of coverage in HVAC and sustainable energy circles—and despite a series of contracts with Southern California Edison, a leading electrical company in Southern California—ultimately filed for Chapter 7 bankruptcy at the end of 2019. The company’s website is no longer live, and its products are no longer commercially available. There is no reason to assume that the company or its innovations will resurface on the market in the future.

It could be that future innovators will pick up the mantle that Ice Energy dropped and try to make their own versions of ice-powered air-con systems. If such an event does occur in the future, hopefully, the new innovators will be able to create something a bit more conscious of the world’s considerable water scarcity problem.

It could also be that Ice Energy’s bankruptcy will serve as a cautionary tale to other companies that are looking to innovate in the air conditioning space. Indeed, it is much less common for tech companies to follow trailblazing innovators into a market niche if those innovators don’t end up finding success. The lack of widescale market adoption for Ice Bear and Ice Cub products, despite all the press Ice Energy received, could prove to be the death knell for ice-powered air conditioning technology in general. Only time will tell. In the meantime, if you are interested in ramping up the efficiency (or dropping the energy cost) on your home or commercial air conditioning system, chat with your HVAC technician today for tips and recommendations.