Which Calculation Is Best: EER or SEER?

When it comes to purchasing an air conditioner, you will likely find yourself wondering: what is the difference between EER vs. SEER, and what do these numbers mean? EER and SEER are both ratings that measure the efficiency of an air conditioner. Both ratings have their advantages and purpose, but you will only need to use one to get a sense of how efficiently an air conditioning system will operate in your home or business. In this article, we will explore the differences between EER and SEER, as well as provide some insight over which rating is preferable for which situations.

EER vs. SEER: What These Ratings Mean 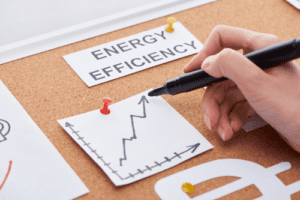 Let’s start by defining what EER and SEER mean. “EER” stands for “Energy Efficiency Ratio,” while “SEER” stands for “Seasonal Energy Efficiency Ratio.” Both are measures of an air conditioner’s efficiency, and both range from 8 on the low end to 30 on the high end. The higher the number you see in an EER or SEER rating, the more energy-efficient your air conditioner.

So why are there two different efficiency measures for air conditioners? Wouldn’t it make sense just to use one of these rating systems? In actuality, there weren’t always two different rating scales. EER came first, introduced in 1975. SEER came later when industry players decided there needed to be a way to measure the seasonal effectiveness of an air conditioner.

As such, EER is, by definition, more of a constant (and therefore more of a “true” rating) than SEER. If you ask your HVAC technician to talk to you about air conditioning energy efficiency, he or she will probably focus on EER values. These values are calculated based on an air conditioner’s efficiency in a particular situation: with an outdoor temperature of 95 degrees (Fahrenheit) and an indoor temperature of 80 degrees, with 50 percent humidity. SEER, meanwhile, is calculated across a wider range of temperatures, ranging from 65 degrees and 104 degrees. Where EER is determined using just one test, SEER uses three tests spanning multiple humidity levels. The idea is to provide a rating that takes into account seasonal shifts in weather.

Deciding Whether to Use EER or SEER

So which rating is the best to use if you want to get an accurate idea of how efficient an air conditioner is? Which rating wins the EER vs. SEER battle? In hot, arid areas where the temperatures are quite high all year-round, the EER is going to be the better efficiency rating. EER essentially measures the efficiency of an air conditioner that is operating during peak, hot summertime conditions. Because it is measured using one high outdoor temperature, EER is by far the best for hotter climates.

Of course, most of the country doesn’t have that kind of 12-month-long summer. While seasonal weather shifts are much more severe in some parts of the country—there is a much bigger swing in temperatures from July to January in the Midwest than there is here in Santa Rosa. For instance—most places do experience some level of temperature fluctuation. SEER, because it is meant to reflect year-round efficiency (factoring in these seasonal weather and temperature shifts), is the preferable efficiency measure if you live or work in an area that has distinct seasons.

As a general rule, use the average temperatures at which EER and SEER are calculated to determine which rating is better for your purposes. If the temperatures in your area regularly reach 95 degrees or higher—at least during the parts of the year when you would have the air conditioner switched on—then you should use EER. SEER can be misleading in these climates because it’s based on a lower temperature. Thus, using a SEER-23 rated air conditioner in a hot, arid place is probably going to yield less satisfactory results than you assume, because the rating would indeed be a bit lower if converted to EER.

Because SEER uses a range of temperatures to come to a final efficiency rating, its average outdoor temperature for measurements is going to be lower than that 95-degree thermostat point used for EER. 82-83 degrees is the average outdoor temperature point for SEER calculations. If the high temperatures in your area during summertime/air conditioning season are at or around this temperature, then a SEER rating will be more accurate for you than an EER rating. This accuracy is essential to consider if you are looking for ways to maximize your air conditioner efficiency.

In Santa Rosa, according to the National Centers for Environmental Information, the average high temperature from July to September is 82 degrees. Thus, in Santa Rosa, SEER will prove to be a more useful efficiency rating than EER. Fortunately, SEER is also more commonly displayed. The United States government requires air conditioners to display their SEER rating somewhere on the unit. There is no requirement to display an EER rating, though some air conditioning manufacturers do so anyway. The government requires SEER ratings to be at least SEER-13.

If you are confused about the EER vs. SEER debate or are wondering whether SEER will provide an accurate depiction of an air conditioner’s efficiency given your area’s climate, ask your HVAC contractor. When you go to purchase and install a new air conditioner, your HVAC expert should advise you on efficiency ratings and help you determine which unit is going to deliver the best results given your location.