There are many situations in which ductless split systems (often referred to as heat pumps) can be an ideal option for heating or cooling a space. 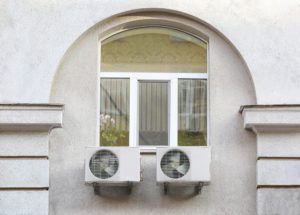 If you are only seeking a one-room HVAC solution, for instance, or if your budget doesn’t allow for the extensive and costly installations of a full ducted central air system, then a ductless split system may be what you need. Unfortunately, there are many myths about this type of HVAC system, most of them unflattering. These myths help explain why split systems retain a relatively small portion of the HVAC market. Below, we will pull the curtain back on some of these misconceptions and explain why they are inaccurate.

In years past, split systems gained a reputation for being quite loud. These systems were quite loud, but it’s a talking point that has clung to ductless split systems for longer than it should have. The fact is that ALL HVAC systems used to be quite loud. Even old window fans were extremely noisy. As technology has improved, engineers in the HVAC industry have found ways to improve all heating and cooling systems so that the blowers don’t make so much noise. If not whisper silent, a new ductless split system should at least be quiet enough to be unobtrusive.

These systems break down regularly and require frequent upkeep

One of the biggest advantages of choosing a ductless split system to heat or cool a room is that you are getting a very economical solution. On the low-to-high cost spectrum of HVAC systems, split systems are far to the left. This affordability starts to look less appealing when customers encounter the second common myth about ductless split systems: that they break down frequently and require frequent maintenance. In truth, a good ductless split system won’t require any more or less upkeep than any other type of HVAC unit. You’ll still want your system looked at by a qualified HVAC technician twice a year (before the summer and winter seasons, ideally) and you’ll still need to swap out air filters and follow other recommended patterns of care. However, these recommendations apply to all HVAC systems, not only split systems. Your ductless split system might actually be the easiest type of HVAC setup to maintain, since there is no ductwork to consider.

Split systems are ugly and obtrusive

One of the most appealing things about ducted systems, for most homeowners and business owners, is that they mainly follow the “out of sight, out of mind” concept. Ducts can be tucked in the ceiling or below the floor, where you don’t see them other than a few vents or grates here and there. The idea of a split system, a wall-mounted unit inside with a second corresponding piece outdoors, is distinctly less appealing. Many buyers picture big, ugly, space-hogging systems jutting out of the wall in an obtrusive fashion. Again, this misconception is at least grounded in fact: past split systems were relatively large and certainly didn’t have much to offer in the elegance department.

Today’s systems are different. As with central air AC systems, most of the bulk of a split system sits outdoors. The actual indoor wall-mounted unit is small and even stylish, with a variety of unit housings to choose from so that you can match the color scheme or décor of your space. In comparison, most window-mounted units are relatively bulky, are unattractive, and limit your ability to use the window for natural airflow, natural light, and other benefits. As for ducted systems, even if they are out of sight, they’ll still take up much more room than a ductless system.

Choosing the Right System for You

With all these common myths busted, it is important to note that a ductless split system won’t be the right choice for everyone. In most cases, these units provide considerable benefits in small houses, condos, apartments, or other limited-size spaces where it wouldn’t make sense to put in ductwork. If you are seeking a whole-house heating or cooling solution for a larger dwelling, you will need some sort of central HVAC setup. If you do think that ductless split systems are the right option for you, contact your trusted HVAC technician today to learn more or to request an installation quote.